You are here: Home / Guest Posts / What’s A Syzygy?

On June 4th, we will have the opportunity to see a rare celestial event and I didn’t even realize it! Thank you to Kristen at Teaching Stars for bringing it to my attention and a huge thank you to her husband, Howard, for writing this post telling us all about it!

A simple definition of a syzygy (si-zə-jē) is a straight line configuration of three celestial bodies, within a gravitational system. Typically, this is used to describe the alignment of the Sun, the Earth and either the Moon or one of the other planets of our solar system. Events like eclipses, oppositions and conjunctions are syzygies. Coming in the first week of June, inhabitants of Earth will be treated to not one but two syzygies.

On June 4th, 2012 the Moon will pass partially through the Umbral shadow of Earth. The shadow of Earth cast onto the Moon by the Sun can be defined as a dark central region (the Umbra) and ringed by a less dark shaded region (the Penumbra). This particular Partial Lunar Eclipse will only be visible to folks in the Pacific Ocean region, including Hawaii and out to Central Australia. To those who do not live in any of those decidedly more tropical locales (like those of us here in CONUS) need not despair for two reasons:

OK. What is a transit you might ask and why should you care if you can’t see one for another 105 years? I can shed some light on the former and at the same time perhaps be able to make a convincing enough case for the latter.

An astronomical transit occurs when one celestial body appears to move across the face of another celestial body, from the vantage point of another celestial body. In other words, we on Earth get to see the planet Venus move across the blazing inferno of the Sun’s face. It will appear as a black dot slowly progressing its way across the Sun’s disk. This is in principle just like a solar eclipse, when the Moon passes directly between the Sun and Earth and casts its shadow on Earth. Except in this case Venus is about 26,000,000 miles further away than the Moon and consequently appears as a small dot moving very slowly across the disk of the Sun.

This image taken June 8, 2004 shows the apparent size of Venus against the disk of the Sun.

For those of us on the side of Earth that will be facing the Sun, we get to see something that occurs cyclically every 243 years. A pair of Venus transits occur, 8 years apart, separated by 121.5 years and 105.5 years. It sounds complicated, but has to do with the orbital relationship between the Earth and Venus. There are roughly 3 Venus orbits for every 2 Earth orbits. This orbital resonance results in Venus’ transit of the Sun being visible from here on Earth in pairs over repeating periods of 243 years. Previous transit pairs occurred in December 1874 and December 1882. The first recorded transit of Venus occurred in 1639, predicted and observed by Jeremiah Horrocks in England.

The first half of this century’s pair of transits occurred on June 8, 2004. The final transit for this century will occur on June 5, 2012, with the black dot of Venus becoming visible as it begins to cross the solar limb at 18:03 EST. It will take 6 hours and 40 minutes for Venus to cross the Sun’s disk, but for observers in CONUS, we will lose the show when the Sun sets at 20:24 EST, or 20:02 PST. Observers in Hawaii get to see the complete show which ends at 18:44 local time. The next chance for humans to see a transit of Venus (from Earth anyway) will be in December 2117 and December 2125.

The Sun will appear about 30 degrees above the horizon for observers on the East Coast of the US when the transit begins at 18:03 EST. This image simulates the view West across the Gulf of Mexico.

Now that we know sufficient information about what is going to happen, how do we safely observe it when it happens? As you may have guessed, direct observation of the Sun can be extremely dangerous and if conducted improperly, can result in blindness or permanent damage to your eyes. NEVER look at, or through any type of optical equipment that is pointing at the Sun without proper protection in place or through devices designed to reduce the intensity of light from the Sun to a safe level.

Contrary to legend, while he did lose his sight, Galileo did not go blind from observing the Sun.

There are several ways to observe the transit. All of them involve throttling down the intensity of the Sun to a safe level. Pinhole projection methods involve making a pin sized hole in opaque material, and then allowing the light of the Sun to pass through this pinhole, acting like a lens and projecting the image of the Sun onto a sheet of white paper. Methods can be as simple as two index cards or more complex involving tubes and boxes. Homemade versions can produce images satisfactory for individual observation but may not always be ideal for viewing by several people. Here is one example of the many guides available online on how to make a pinhole projection device.

Another accessible and inexpensive way to observe the Sun is by using a method known as binocular projection. It involves a pair of binoculars, a tripod, a piece of cardboard, and a piece of white paper. I believe this method produces the best results with items that most people have laying around their home. Here and here are some examples that illustrate how they work. In a follow up post in the next couple of days, I will be outlining exactly how to we set up our binoculars for viewing with images showing the process and results. 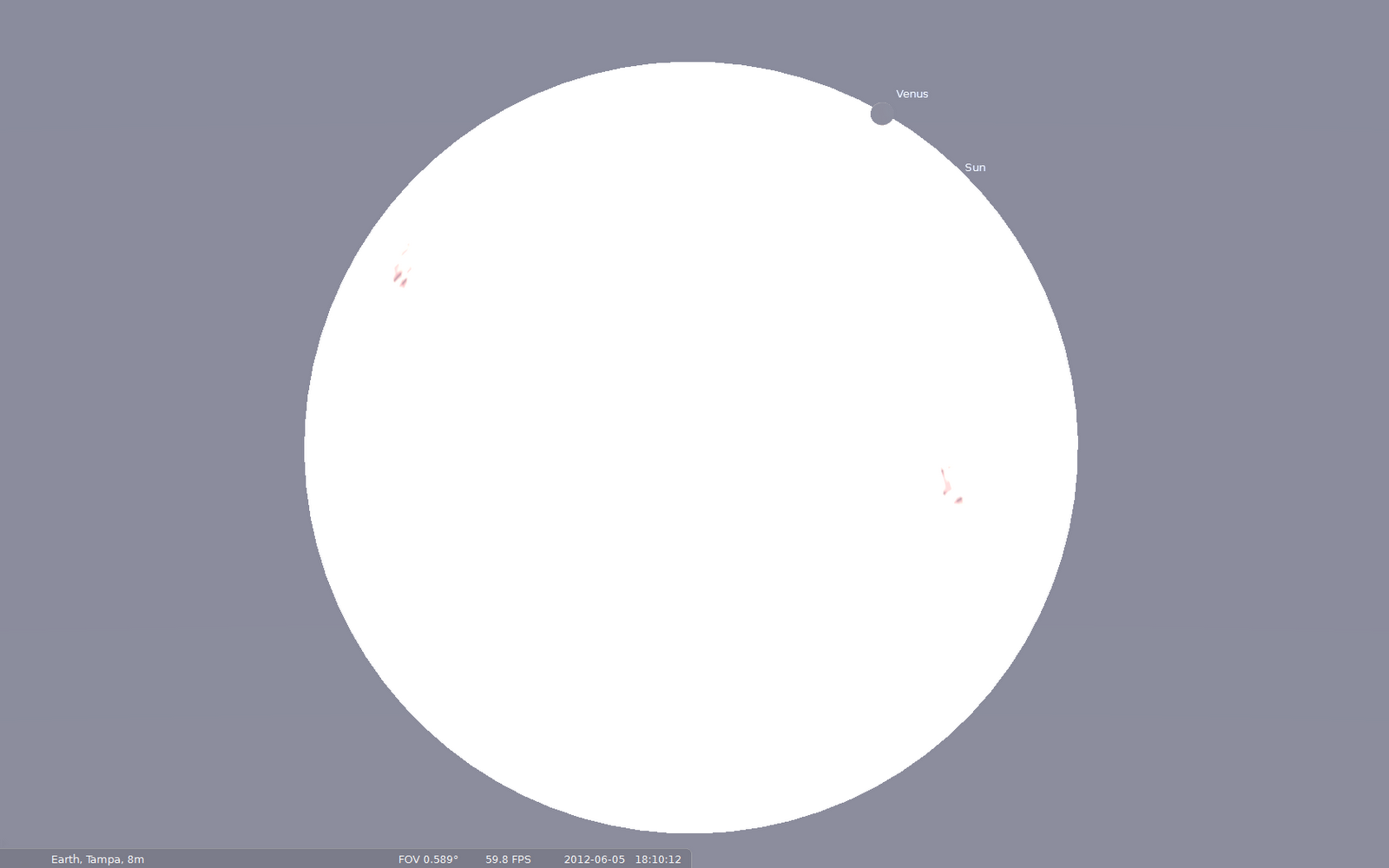 This image simulates the disk of the Sun just a few minutes after Venus has begun to cross the solar limb.

There are also many commercial products already available. From a simple pair of cardboard glasses with solar film, to high-end Hydrogen Alpha Solar scopes, there are many choices for all skill and interest levels. At this time, it is unlikely any of the products available for order will be in stock or will arrive in time for the transit. If saving money wasn’t incentive enough, the homemade device may prove to be the only option.

Don’t forget that because the Sun will be low on the horizon during much of the transit for those of us in CONUS. This means more atmosphere, haze, clouds and dust will be impeding light flow, acting as a giant filter. This will lead to some stunning image opportunities for the photographically minded. I will also be recording the event photographically and will share here in a follow on post about the transit. 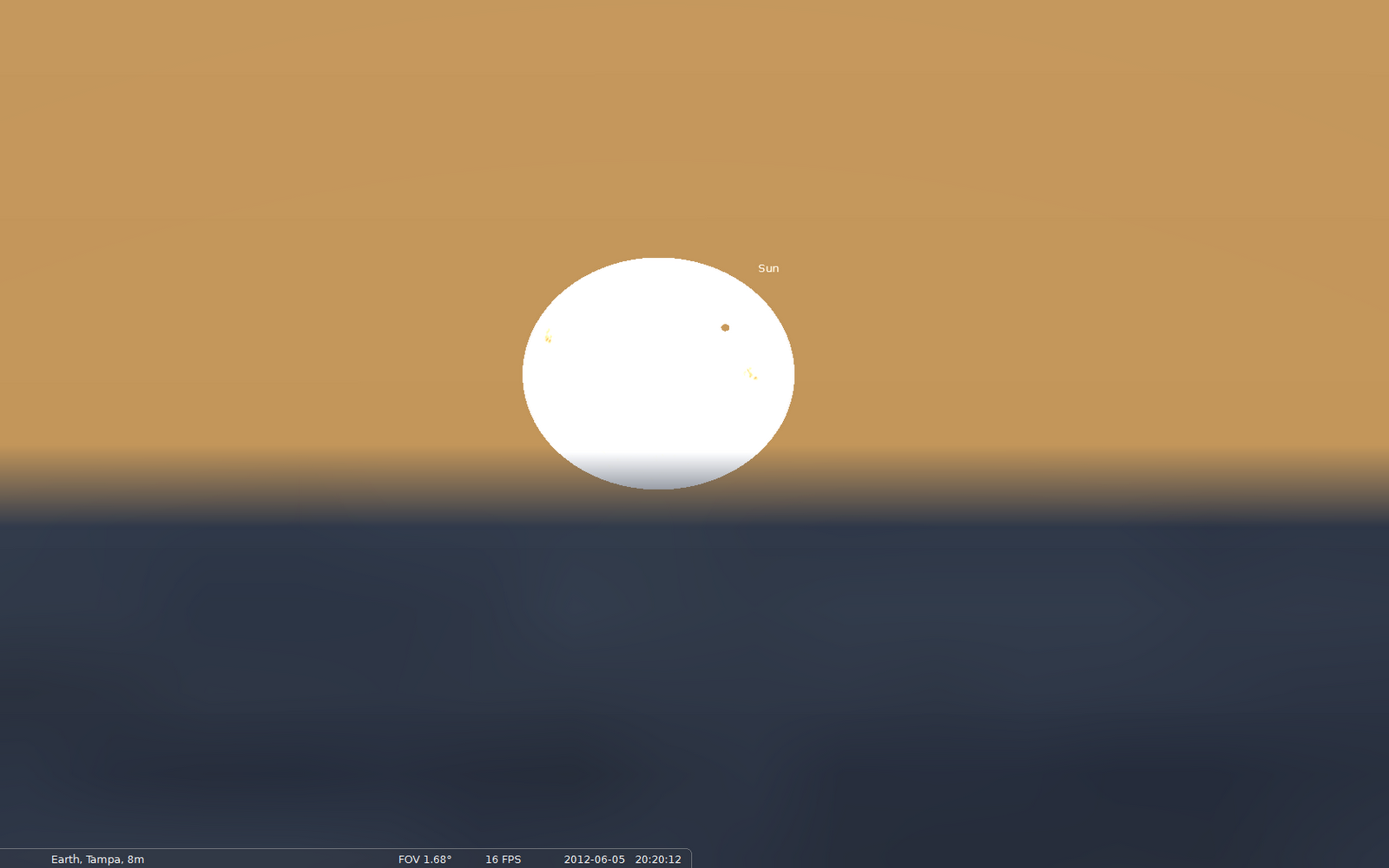 This image simulates the view seen at 20:20 EST over the Gulf of Mexico, just as the Sun is about to dip below the horizon. The Black dot of Venus is visible, and with the Sun very low on the horizon, should provide some spectacular photo opportunities. This will be the last sunset with a Venus transit for more than a century.

I know that in a world dominated by Earthly news and events surrounding conflict and elections, it is hard sometimes to find the time to think of or care about the denizens of the deep sky. But it is important that we keep looking in wonder and amazement at the Universe around us. If for no other reason, because it can show us how small our problems are in the environment we mistakenly believe is separated from the vastness that surrounds it. Our “world” has been shrinking for centuries as we humans have moved outward and explored our home planet. Those mysterious horizons of the past provided vast canvases that humanity painted with optimism and hope for an exciting future. The expanse of our solar system and of space beyond teases us with the possibilities of new horizons never before dreamed of.

Rarely in our lifetimes do the distant and seemingly irrelevant objects in our solar system make their presence known beyond their pale glows caught in the twilight and evening hours. On June 5th, 2012 we have a chance to catch one of the rarest of planetary views; a brief glimpse of our home planet’s celestial sister in a daytime dance around our parent star, the Sun. And THAT is pretty darn cool. 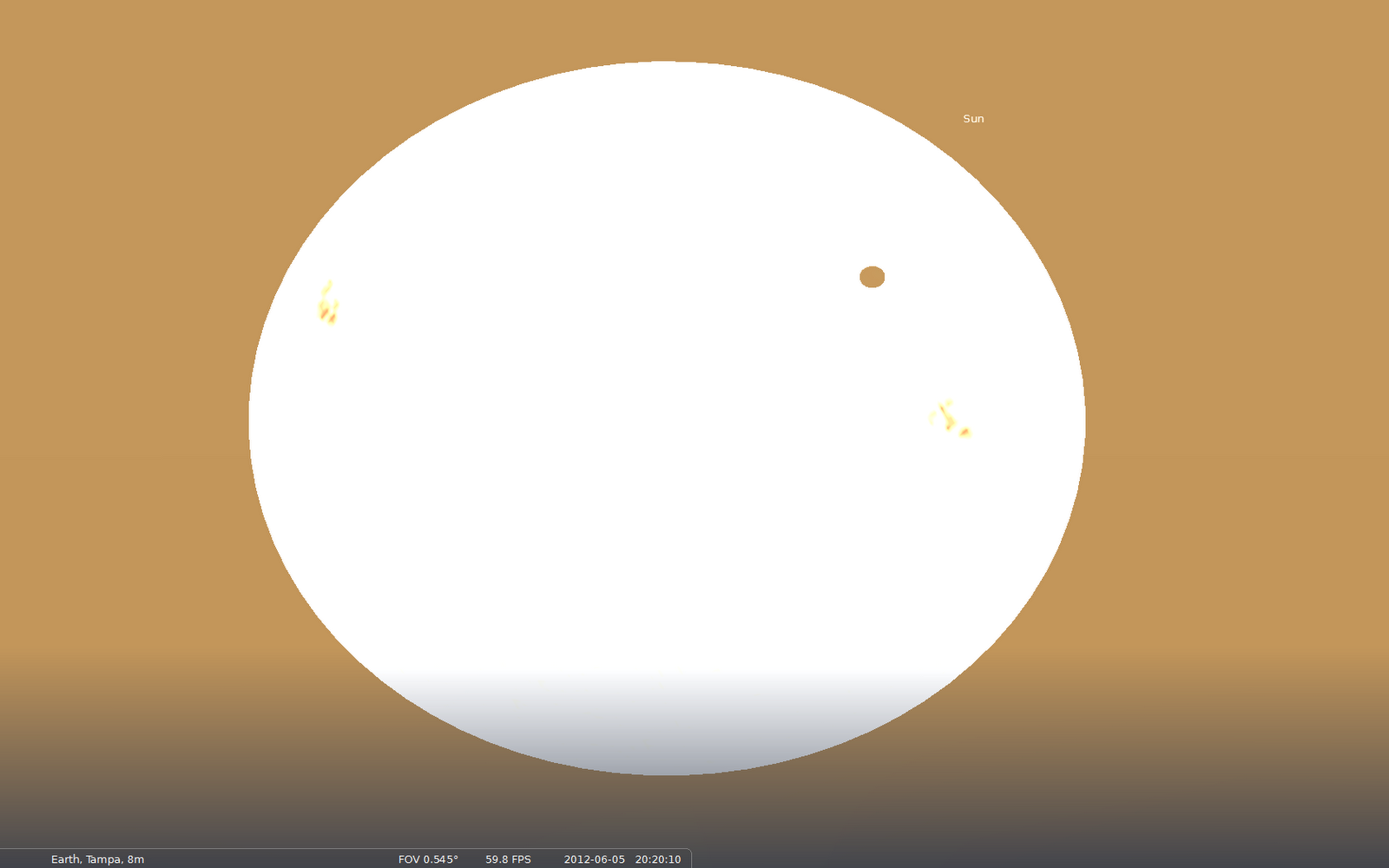 A simulation of our view of Venus as it treks across the face of Helios for the last time in our lifetimes.

Teaching Stars just added this post for tips on how to safely view the upcoming syzygy.